The notion that capitalism is flawed, or dead as the German philosopher Wolfgang Streeck argues, is a driving force behind Laudes Foundation’s search for new economic narratives. We believe that establishing new approaches to redefine and redistribute value for the good of all is a necessary step to combat the dual crises of inequality and climate change.

In the latest Laudes Finance Dialogue we invited Jayati Ghosh, leading development economist and Professor of Economics at the University of Massachusetts, to share her views on how we can enable a sustainable future for humanity, one that is in harmony with nature and the planet.

Economic models must be underpinned by regulation and redistribution

Capitalism is dead because it is not providing society with the kind of dynamic growth it’s supposed to promote. According to Jayati, instead of driving human progress across a wide spectrum of society, it is concentrated among already privileged groups, exacerbating inequalities and leaving the mass population in even more materially insecure circumstances than they were before. She says, “the unfortunate part of capitalism already being dead, is that there isn’t another system waiting in the wings to come in and take over”.

Expressing scepticism about replacing capitalism with a single alternative system – “we’ve experienced the travails of existing socialist economies and how they were over centralised, over bureaucratised, non-gender friendly and created new kinds of inequality” – Jayati’s vision of the future is to avoid a one size fits all model and to try different economic experiments that are all underpinned by greater regulation and redistribution than we have today.

She envisions a multi-coloured economic system than not only encompasses green, to reflect the environment and climate, but is also blue to preserve water, purple to represent the care economy and red to denote a better distribution of excess wealth – both for individuals and global corporations. She says, “more colours can be added as we think of new possibilities and the different kinds of inequalities that are driving our current rush to catastrophe”.

Inequality is fundamental to the world’s problems

The fundamental axiom behind Jayati’s view is that we are not going to solve any of the existential challenges to humanity and the planet without addressing inequality. These inequalities cover many dimensions, including income, assets, access to basic needs such as housing, education and health. However, they also cover inequalities of time and of social and political voice that inhibit people’s ability to express their own needs. She says, “gender is the most extreme and cross cutting example of this kind of inequality, but you will find there are other kinds of inequalities for other marginalised groups and for groups who are discriminated against across the body of nations”.

A major hurdle to addressing inequality through legislation is that current policies are not only blind to these inequalities, but they often actively rely on them. For example, Jayati says, “they utilise the fact that you can get unpaid labour to manage care work, so when they implement fiscal austerity, they cut down a number of socially provided services.”

Jayati believes international inequality has been amplified by the pandemic, with vaccine inequality emphasising to poorer nations that the world is ‘certainly not all in this together’. In her view the sense of trust between developed and developing nations has broken down, with institutions such as the G7 and G20 losing credibility following a string of broken promises, including the failure to deliver the committed USD100 billion a year to address climate defence initiatives in the developing world.  She adds, “lots of developing countries can say to advanced countries we don’t trust you anymore, but that would be fatal for the global project to save the planet.”

Better multilateral cooperation on core topics such as climate, corporate taxation or achieving health for all would be a way of rebuilding that trust. Instead of focusing on aid and charity for individual countries and projects, Jayati thinks we should look at these issues as global challenges that need to be addressed through global public investment. She says, “with climate change we know that mitigation expenditure, adaptation expenditure, dealing with loss and damage and people being displaced – all of that is going to cost huge amounts of money – so we’re going to need much more public spending”.

Fixing these global challenges will not simply be a matter of gathering vast quantities of money, however. Jayati asserts that it is the quality of this finance that is really critical. It should be long-term, patient capital that creates positive incentives for certain kinds of spending and behaviour and ensures people have access to the impact of the money being spent. She says, “public investment shouldn’t be short term in its orientation, it shouldn’t be maximising efficiency in terms of the number of nurses per beds, for example, but should be designed for giving an overall better situation”.

If the public sphere is going to take on a much bigger role in addressing the world’s challenges, it will need to be accompanied by much more regulation of markets. Jayati says, “this new society will need regulation not just for where investment flows but also for how labour markets function to avoid certain categories of labour being exploited more than others; how individual producers, consumers and investors can exploit nature and whether there are limits to that; and how cyber space is used”. She believes regulation can be used to generate incentives for people to behave in a much more socially responsible way.

Humanity is at the cusp of a series of urgent and long-term challenges. Jayati suggests the choices we make today are ultimately going to determine our way of life in future decades. Accordingly, she is working on a series of projects tackling health for all, ensuring the equitable taxation of global corporations and the extremely wealthy, as well as developing an alternative metric to GDP for measuring human progress. She says, “these are all critical building blocks in creating a society that would be just, equitable, sustainable and in harmony with nature”.

However, real change will need to be driven by public pressure. Jayati’s theory is that “governments don’t suddenly do things because they see the light, they do things because people make it impossible for them not to. If we could create enough of a noise around this, a social noise demanding it, then I think we could get somewhere”. To her, part of the current problem is that not enough people realise there are alternative ways of doing things, therefore the wider population are failing to generate the human agency needed to change the system.

And this is where philanthropy can play an important role. At Laudes, supporting and nurturing new economic thinking is a core part of our efforts to catalyse systems change. By moving these ideas from theory into practice, building capacity and translating thinking into policy, regulation, legislation and new business models, we can bring these alternative economic narratives to a wider audience. The time for failing economic systems is past, we must focus on what’s possible and spread the word as widely as possible. 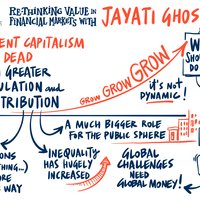 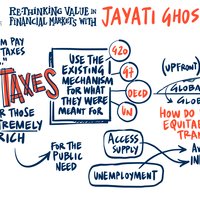 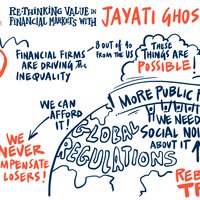 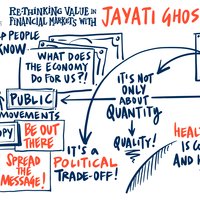 Kelly is the Director of Finance Capital Market Transformation at Laudes Foundation. The love she holds for her twins and concern for future generations motivates her to strive for change in the global economy and the financial system that supports it. She brings a strategic, intersectional view to tackling inequality and the climate crisis, and a deep desire to build bridges and unify perspectives. 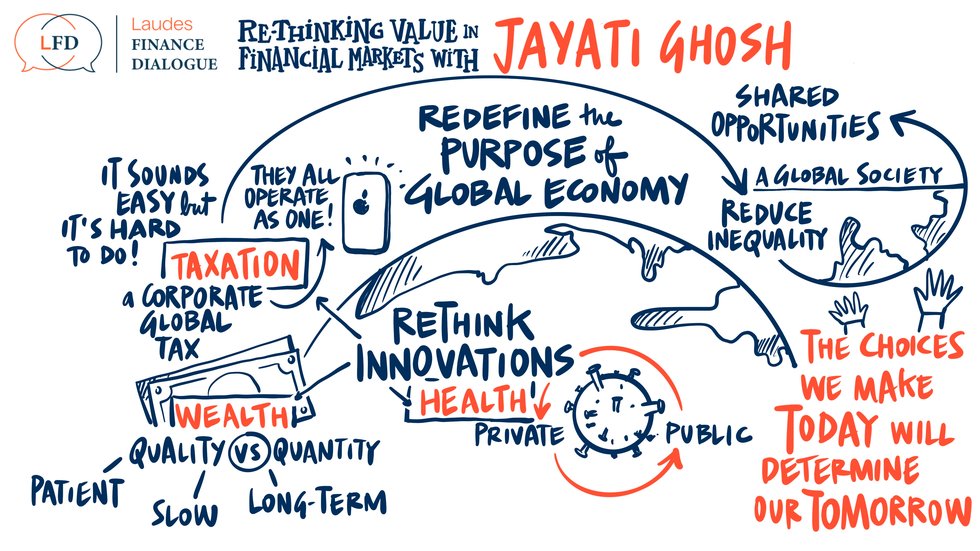 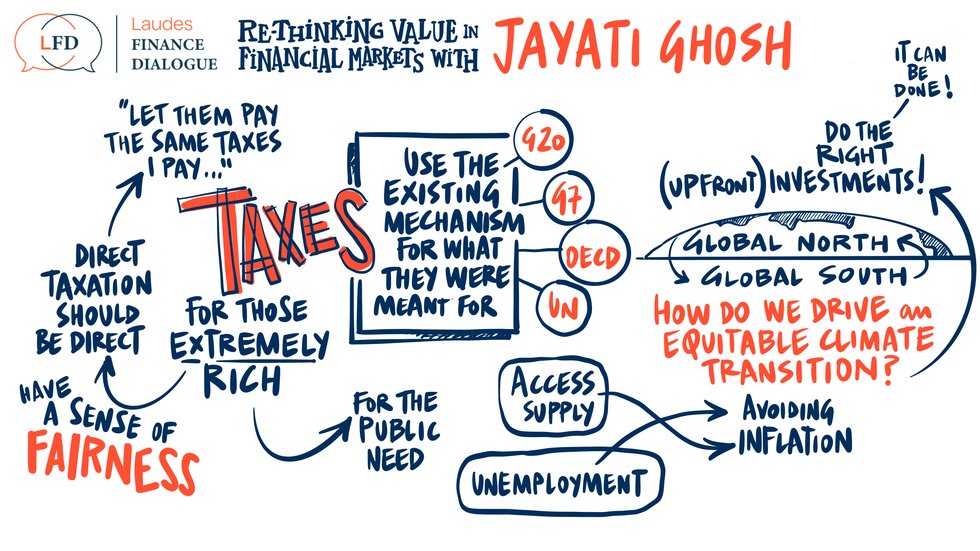 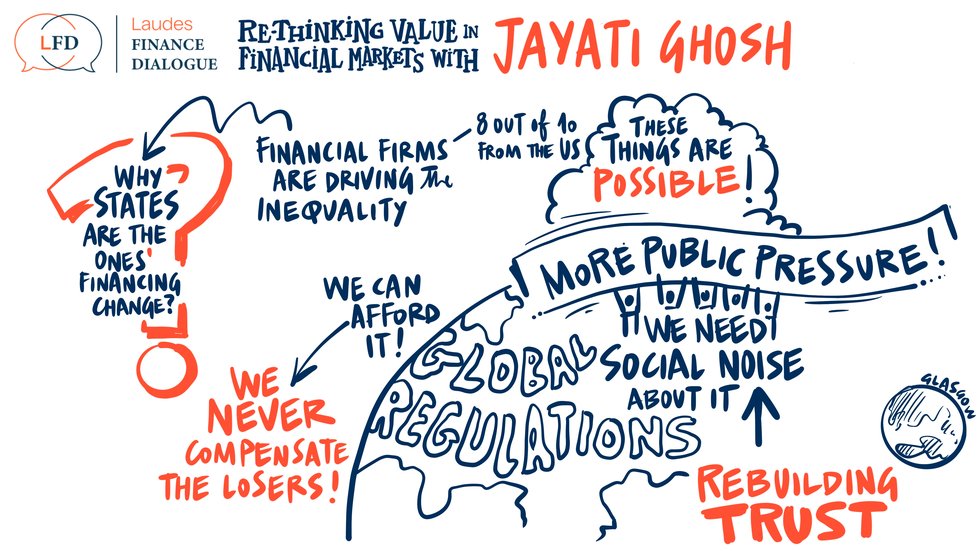 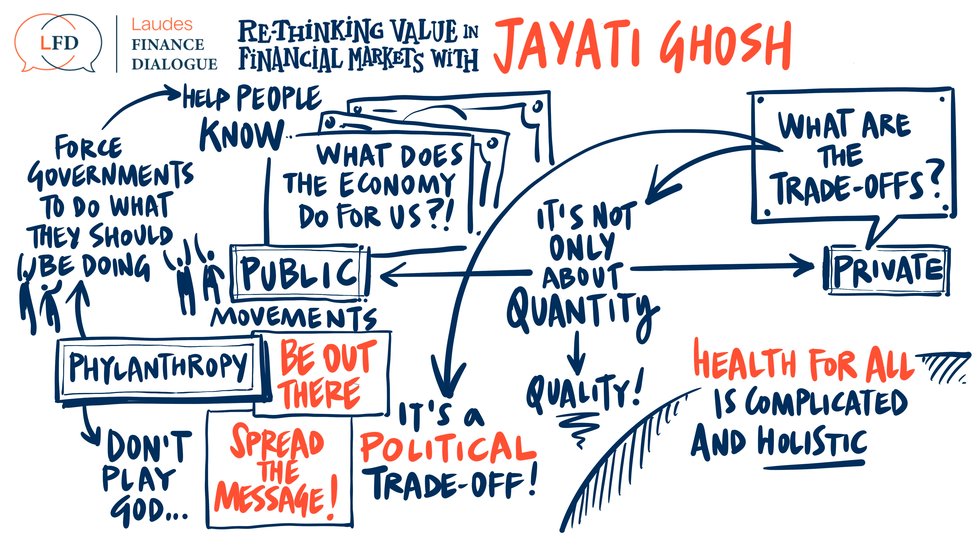