Workers in the data narrative: A missing protagonist

Data has the power to spur action. But for that to happen, it has to be in the right hands.  The disclosure of meaningful data on factories and working conditions is an essential component of worker-led change in the apparel sector. But before workers can use data effectively, it must be easily accessible, usable, and reflective of their needs and experiences.

This May Day, Laudes Foundation partners are calling on the ILO Better Work to make public data more accessible and useful to workers. 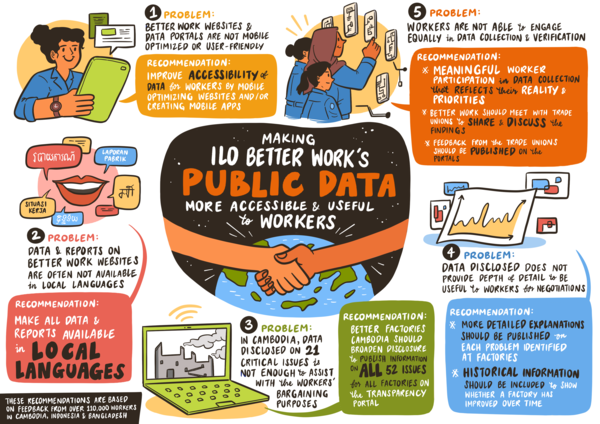 In recent years, there has been growing momentum behind supply chain transparency in the apparel sector. There has been an increased awareness that transparency is critical to ensuring that businesses are living up to their commitments and with an increased demand from civil society, more and more factory level data is being published

However, whether and how public data is being used by workers is an aspect of transparency that has been largely overlooked. For transparency to be a truly meaningful catalyst for change, it should strengthen workers’ ability to do evidence-based bargaining and push for change in working conditions from the bottom-up. 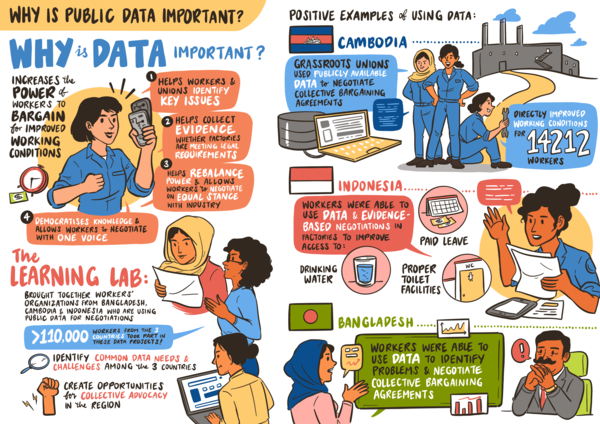 This is the challenge that Laudes Foundation partners in Cambodia, Bangladesh, and Indonesia, three of the top 10 apparel producing countries in the world, took up over two years ago. The initiative was led by Solidar Suisse in Cambodia, Solidarity Center in Bangladesh, and Care in Indonesia, along with local trade union partners representing over 110,000 workers across the three countries.  They set out to test whether data available in the public domain (for example, data from Better Work’s transparency portals) is being used meaningfully for collective action by workers and trade unions at the factory level.

Early on in the initiative it was apparent that our partners faced a daunting task – to build understanding among workers and trade unions on public data in contexts where there are low levels of technological and general literacy, gendered barriers to the use of technology, and little to no awareness that these public data sources even exist. Laudes Foundation was interested in understanding the common challenges in the three countries and whether our partners could support each other through peer learning. We created a regional Learning Circle, a community of practice among the partners, so that they could share lessons learned, ask questions and receive actionable input from colleagues grappling with similar problems.

Through discussions in the Learning Circle it became clear that while developing workers’ capacity to access and use data is certainly a challenge, the greater obstacle was the data sources themselves. In general, the data portals are not user-friendly for workers. For example, the Better Work data portals are not easy to navigate through mobile phones (which most workers use), with the exception of Cambodia, the information is not available in the local language, the type of data disclosed is often not detailed enough to be useful to workers in factory-level negotiations, and data that is disclosed is often not what workers need for their negotiations.

Above all, publicly available data often doesn’t match the lived reality of workers, which significantly diminishes workers’ trust in these data sources.

“What we found is that when creating data, no one thought of talking to workers on the ground to understand how they would use the data or it was not thought that workers or grassroot organisations would be the end users of this data” adds, Sanjiv Pandita, Regional Representative Asia, Solidar Suisse.

In all three countries there is strong worker interest in data and evidence-based negotiations and once workers learned that public data was available on their factories, they were very eager to see and use the data. However, the quality of data was often a disappointment.

Initially, trade union partners in the countries wanted to collect their own data; however, the discussions in the Learning Circle proved that this is not a sustainable solution. The onus cannot be on under-resourced, overworked garment workers and trade unions to collect data about their factories. The responsibility must lie with data providers who have the technological capacity and resources to ensure the data is valuable to workers. That means ensuring workers are meaningfully involved in the data collection process, that disclosed data is what workers need, and that data is published in easily accessible and usable formats.

Data providers must be held accountable. Our Learning Circle partners and affiliated worker organisations  in Cambodia, Indonesia and Bangladesh, have developed a common set of demands based on their experience of using data. They are calling on Better Work to heed recommendations and uphold the ILO’s tripartite commitment. Better Work is one of the largest data disclosers of factory-level working conditions across many apparel producing countries. As part of the ILO, a UN agency that is meant to represent the workers voice, they are best positioned to lead the way to improve public data.

Disclosure of better data on factories and working conditions is an essential component of worker-led change in the apparel sector. As a partner trade union leader in Cambodia puts it, “public data must be a bottom-up democratic process that involves grassroots workers at every stage.”

On this May Day, Laudes urges all organizations who are working to improve conditions in apparel supply chains to support our partners and call on Better Work to take the steps necessary to ensure that public data is democratic and reflective of workers’ needs.

News
Transparency’s transformative act: the power of data
News
Community groups win a platform for change in Tamil Nadu
News
Request for Proposal: Facilitating a community of practice among partners working to decarbonise finance and investment in the built environment
News
Making climate action in the built environment socially equitable: a joint endeavour