Celebrating Those Who #ChooseToChallenge Our Global Economic System

On this year’s International Women’s Day, we are celebrating those brave and inspiring women who refuse to accept the status quo and offer, instead, a pathway to a new economic system. If the past year has taught us anything, it’s that our economic system is not fit for the present, let alone the future. The global pandemic has exposed the deep cracks in our economic system, which are neither valuing what should be valued (e.g., people, relationships, nature, community) nor preparing us to tackle what is perhaps the most monumental challenge of our time: the climate crisis.

A handful of smart, insightful and visionary female economists and practitioners are leading the way. And we at Laudes Foundation are honoured to support their important work, which builds on the pioneering thinking of many women who came before. For example, it’s almost 50 years since Donella Meadows wrote – with three others – the Limits to Growth, foreseeing the catastrophic impact of exponential economic growth in a world limited by planetary boundaries. This was a prescient study – but also one that was stridently criticised in academic, business, and economic circles. It’s only over the past few decades that these ideas have become gradually more accepted (which is not surprising, given we are starting to see some of the negative impacts of unrestricted economic growth playing out.)

IWD’s theme this year is #ChooseToChallenge. And challenge, we must, because we are facing multiple crises – from a global pandemic and deepening and crippling inequality in our societies, to an existential climate crisis. The time is ripe for visionary women leaders to step up and challenge our neoliberal capitalist system which has created much wealth and opportunity, but also exacerbates inequality and climate breakdown. 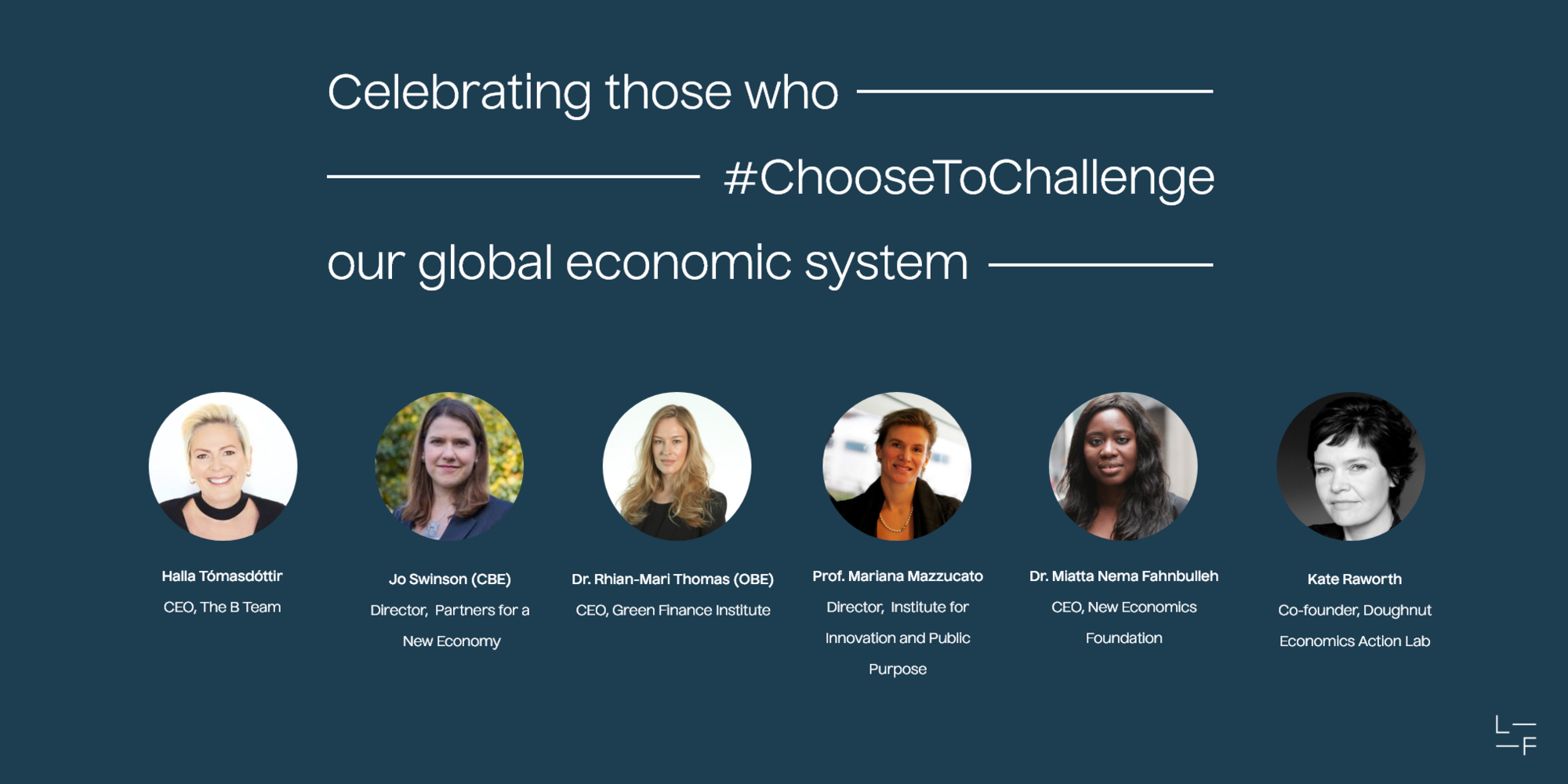 At Laudes Foundation, we are honoured to be able to support many of these leaders whose ideas and actions are contributing to the climate-positive and inclusive economy we all want to build for our children and future generations.

The B Team’s Chief Executive Halla Tómasdóttir who chooses to challenge the role and responsibility of business in creating an inclusive economy and is, in her own words, “galvanising bold dialogue and brave action, not just among the committed, but also among the reluctant”.

Chief Executive Miatta Nema Fahnbulleh who chooses to challenge how the rules of the system are made and leads the New Economics Foundation to make sure the economy works for everyone.

Chief Executive Rhian-Mari Thomas OBE who chooses to challenge, in her role at the Green Finance Institute, how finance (the lifeblood of the system) can be used to accelerate our journey to an inclusive, net-zero carbon and climate-resilient economy.

Economist Kate Raworth who chooses to challenge the ‘traditional’ economic mindset and instead is offering a vision – the doughnut – of what it means for humanity to thrive in the 21st century and beyond.

Economist Mariana Mazzucato who chooses to challenge what our capitalism system values; specifically calling out the bizarre construct where value extraction is rewarded more highly than value creation. Her Institute for Innovation and Public Purpose is leading the way in changing how public value is imagined and practiced.

Partners for a New Economy Director, Jo Swinson CBE who chooses to challenge the models behind ‘traditional economics’ and is mobilising philanthropic funders to support innovation in economic thinking.

And each of these visionary women (and the teams behind them) could not be more critically needed at this time. Governments are crafting – real time – their approaches to a recovery from the global pandemic. Which gives us a choice. We could simply take the easy route and ‘build back’ to the only economic system we have ever known. That’s what we did after 2008.

Or, inspired by the bold, brave and fresh ideas of these visionary economists and practitioners, we can take another route and advocate for policies that embrace an inclusive and green recovery.

This won’t be easy. But in the spirt of IWD 2021, I think we all need to step up and #ChooseToChallenge ourselves, embracing what it takes to build a climate-positive and inclusive economy.

We need brave and bold action to limit the effects of climate change and address the deepening inequalities in our society. As CEO of Laudes Foundation, a wife and a mother, I am deeply committed to our mission. And I am honoured and humbled to lead a team of smart and passionate people delivering on it across the globe.

Blog
One year of impact: marking Laudes Foundation’s anniversary and outlining our strategy
Blog
Our journey towards equitable evaluations
Blog
Working together to progress corporate accountability through mandatory due diligence
Blog
It Starts with Trust: C&A Foundation’s Response to our Partner Survey